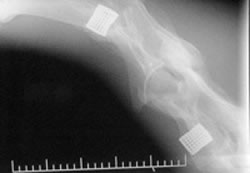 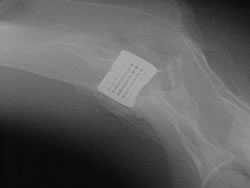 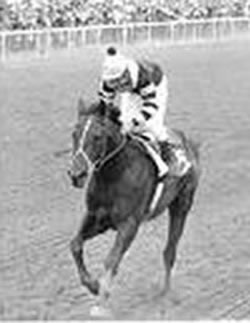 The same day, May 7, 1977 Finelli had surgery, Seattle Slew won the Kentucky Derby. In 2000, Seattle Slew would have the cervical spinal surgery enabling him to breed 60 mares the following year.

The surgical treatment of equine cervical vertebral malformation is based on the principle of eliminating spinal cord compression. This cervical spinal cord surgery is done by fusing the cervical spine joint that the compression is seen when the necked is flexed during the myelography procedure.

The present day technique used, equine cervical joint fusion surgery, is an adaptation of the original procedure used in humans that was developed by Dr. Cloward. Dr. Cloward’s technique had replaced plates and screws with bone dowels (obtained from the patient’s hip) that were slightly larger than the hole that was drilled into the joints of the affected cervical vertebra. This larger dowel when gently hammered into the hole had a very tight fit and resulted in a rapid fusion and eliminating cord compression.

The adaptation of this technique (equine Cervical Joint Fusion surgery) was pioneered in 1977 by a human orthopedic surgeon Dr. George Bagby of Spokane, Washington working with a team of veterinarians, Dr. Grant and Dr. Pamela Wagner at Washington State University, Pullman, Washington. While on a trip to Las Vegas, the three discussed whether the Cloward technique would work on horses as well as it was working with humans.   The team at WSU decided to attempt this procedure on a donated wobbler using Dr. Bagby's human instruments and a bone dowel collected from the patients hip. The surgery was long but the horse recovered despite a traumatic recovery. Four days after the first surgery, the horse died from respiratory complications.  Post mortem examination revealed that the bone dowel was still firmly in place so the team felt encouraged to try again.

At a demonstration procedure May 7, 1977 Dr. Bagby along with Dr. Grant & Wagner placed a dowel into a second horse (Finelli) in under two hours. Finelli recovered from surgery and went home to return to the clinic four months later with a wound needing care. While recovering at the clinic, and being turned out in pasture, the colt was able to run to the bottom of a steep hill, bucking and kicking. Dr.s Grant and Wagner were impressed by how much the colt had improved from his ataxia.

After over 70 horses were implanted with bone dowels, the team at WSU decided to replace the bone dowel with a stainless steel dowel/implant (Bagby Basket).  A hole was drilled between vertebrae and the dowel/implant was hammered into place. The bone graft material from the drill site was placed back into the implant and resulted in a complete fusion without the use of bone cement.

Since those early days of surgery there have been many improvements in technique. Dr. Bagby and another orthopedic surgeon, Dr. Steve Kuzler, adapted the implant by adding threads so that it could be screwed into place thus avoiding any trauma from the hammering procedure. Since adding screws to the implants, there has been a reduction in the number of fractures that can occur when a larger ataxic horse has a stormy recovery after surgery. To help accurate implant placement, the surgical technique evolved to include a pin, centering pin, drill guide and cap to achieve the proper alignment for drilling and implant placement.

Due to Dr. Grant’s continued work with Dr. Bagby they have come up with the present day technique that cuts the surgery time in half of that first surgery done back in 1977 (one implant in under an hour). There are several veterinarian surgeon’s who have learned the techniques from Dr. Grant, including: Dr's Reed and Woodie at Rood & Riddle, Dr. Trostle at Blue Ridge Equine, Dr. John Walmsley in England, and Dr. Werner Jahn in Germany. This procedure presently has been used on over 80,000 humans.