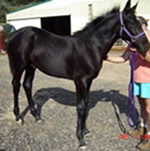 My husband and I live on a farm in Northwestern Oregon. It was a fixer-upper, to say the least, and after several years we finally got to a position where I could realize my dream of breeding and raising Hanoverians.

Tanner was our first foray into the world of breeding and we both learned a lot along the way, thanks to the support and help of our vet. We carefully selected the stallion that would best compliment our mare and the day finally arrived when she went into labor. As she strained and the front legs of the foal were visible, I was delighted to discover that this foal was black!

Tanner was a very curious and adventuresome foal. Always kind and quick to learn. He was everything I had hoped for and had big expectations for his future. We took him to the foal inspection – a four hour trailer ride away – and he handled the ride like a pro. Once at the site, he endured being cooped up in a stall all day and having to be braided. He was a real trooper.

When it came time to present the foals we took him into the outdoor area and let him strut his stuff. It was a sand ring with no fence and my husband trotted our mare around while Tanner left the area all together! Just galloped off into an adjacent field! When he finally realized his mama was not with him he came galloping back whinnying and, turning a corner too fast, fell down in a spectacular cloud of dust! Despite his silliness, he was named the top foal at the inspection. We could not have been prouder or more pleased!

As time went on, I noticed that Tanner was carrying his tail off to one side. At first this was the only indication that something may be wrong. More time went by and he became increasingly clumsy and seemed to drag his back toes.

My vet came out and did some manual neurological tests on him; crossing his back feet to see if he knew where they were, pulling his tail from either side as I walked him forward, etc. But the most telling was blindfolding him and asking him to walk forward. He was completely ‘at sea’, not knowing where his feet were. I was just sick with dread at what this might mean.

We took him down to Oregon State University where the vet school is for more testing. He was left overnight so Dr. Schlipf could perform a myelogram - a complex x-ray of the spinal column of the neck where precisely the same amount of ‘dye’ was injected and the same amount of spinal fluid drawn. The results were clear – Tanner had a compression of the vertebrae in his neck in one, perhaps 2 different spots. He was a ‘Wobbler’. I was devastated and not sure of my options. How much better would surgery make him? Would he be rideable? Would he be safe? Should I put him through the surgery at all? How hard would it be keep him quiet post surgery and could I put a 2 year old, full of energy and life, THROUGH this? We loaded up and went home.

The findings of the myelogram were forwarded to Dr. Barrie Grant, THE pioneer in the area of Wobbler surgery in horses. I was told he had perfected a procedure called"Basket Surgery"; in horses – an operation that was patterned after the same type of surgery in humans. The vertebrae that are pressing down on the spinal cord causing problems are fused to alleviate the pressure. My first thought was one of excitement. It may be possible to have the best of the best perform surgery on my horse. But, could I afford it? At this point I felt I had 2 choices. Make this right for Tanner or have him euthanized. I decided I had to TRY. After Dr. Grant viewed the test results he felt there may be yet another area of concern. THREE?

This became the most difficult time throughout this ordeal. If, in fact, there were 3 areas needing fusing, would it be fair to Tanner to do so? Would I have a very expensive pasture ornament? Could he even be trail ridden? And what kind of use would he have of his neck. Even if he could not be ridden I wanted to make certain his quality of life was good.

I struggled with my decision and finally agreed to move forward with the surgery. My husband, best friend, and mom, all backed my decision. He did not seem dangerously ataxic to me and if the surgery helped, wouldn’t he be better than he was?

Everything was lined up for Dr. Grant to fly up to Oregon from Southern California to perform the surgery. And, thankfully, when he saw the original results of Dr. Schlipf’s tests, he saw only one area needing fusing! I was so relieved and finally at peace with my decision. Up to that point I had been second and third guessing my decision to move forward.

The surgery went smoothly. One hurdle crossed. Now, it was a matter of keeping Tanner quiet and letting him heal. He spent about a week in the hospital and we visited him a couple times (hour and a half away and we both work full time). Tanner was very happy to see us and enjoyed being brushed. It was hard to see him there, hooked up to IV’s and big bandages around his neck, particularly since he, at one point, was the only horse in intensive care and was in a pod all alone.

Post surgery, my husband built Tanner a “stall” outside between the pasture his mom was in the one where his brothers were. We fed everyone up in the same area so he didn’t feel alone and with the help of Resurpine, a long acting tranquilizer, and some anti-psychotic drugs, we were able to keep him quiet and happy. This was very tense for me and any false move on his part had me worried. As time went by and I learned to manage him better, I became more relaxed about the recovery

After 60 days we were instructed to start hand walking Tanner. I was pretty nervous about getting him out of his stall for the first time so I gave him some acepromazine, a tranquilizer to keep him sleepy. He was VERY excited the first time he got to leave his stall. We brought him down to the arena and walked him around. Dr. Grant said it would be teaching his nerve pathways to function properly again. Tanner seem to be dragging his feet even more than before but, as upsetting as that was, I remembered Dr. Grant told me this was a possibility before he got better.

That first step into Tanner’s new life is now 60 days ago. He continues to improve and now backs like a normal horse. After the surgery he had no idea where his back legs were and now, after a few short months, he is close to normal.

The next and final step was to prepare an area that he could be turned out in that had safe footing so he wouldn’t fall if he got silly. I gave him another few cc’s of acepromazine and we turned him out in an 80’ x 80’ paddock. We stood and watched this beautiful boy trot around and I swear he had a big smile on his face. I looked at my friend and husband and their expressions matched. It was so emotional to see him as a ‘normal’ horse again, free, trotting and cantering at will, that we all shed a few tears that day.

In retrospect, I am very pleased with the results of this surgery and happy that I didn’t give up on this special horse. Before, where there was despair there is now hope. Again I am dreaming of the day when we win our first dressage class and I can look back on this and thank God I went through with the surgery and that there is Dr. Grant, who works miracles, available to save these horses. When you go through something like this with an animal you form a special bond and Tanner will be with me forever.