Independence, "Indy", The Comeback Kid by Anne B. Wong, MD 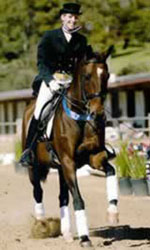 Before he treated my horse, the veterinarian told me he knew of only one other horse that returned to Grand Prix dressage following cervical spine surgery. Now he knows of two.

The second success story is my Dutch Warmblood gelding, Independence.  He had been shown through Grand Prix by Chelsey Sibley when in 2003 he sustained a mysterious injury.  In the months that followed, Indy's left side atrophied completely.

Finally, the veterinarians' at San Luis Rey Equine Hospital in Bonsall, CA, determined that Indy had injured his cervical spine. In January 2004, Dr. Barrie Grant performed a cervical spine fusion. The post-operative period was stormy, and for days Indy refused to east or drink. At one point, I thought I was going to lose him.  He remained at San Luis Rey for weeks.

After Indy had recuperated sufficiently to be discharged, he had three months of free-lunging and hand-walking.  He received intensive muscle therapy, bodywork and nutritional support.  I spent hours sitting in his stall.

That August, Dr. Richard Markell examined Indy and told me that I could begin riding on loose reins at a walk and in a straight line at a trot.  Indy has always been a hot horse, with a signature "spin and run" style, so I was not sure what would happen.

Indy and I had a talk. We agreed that when he got scared, he would stop and look.  I would check things out for him.  If I did not see any "horse eating monsters", I would ask him to walk on.  One morning, we had a lot of "stop and look" moments, but we did manage to get to the arena.  Once there, Indy sighed and visibly relaxed, seeming to say, "I know this.  I am OK".

At the nine month post-surgical checkup, Dr. Markell was pleased with Indy's progress, although his right hind leg was still weak and he had some musculoskeletal and prioceptive difficulties.  Dr. Markell kept repeating that it takes eighteen months before one can tell how such cases will recover. Over the ensuing months, I was to help Indy build strength by riding on contact but without collection. I had tears in my eyes when we cantered for the first time.  He had trouble picking up the left lead and for a while could not make a canter-walk transition with out stumbling.  Slowly, he regained balance and confidence.

In January 2005, Dr. Markel gave Indy the green light to return to full training.  Indy felt like his old self again, spinning and running.  Once again, he could scratch his nose with hind leg.  He was still a character, still pushy.

That month, I left Indy with trainer Kim Kulesa in Moorpark.  I promised Indy that I would make the 100-mile drive every week to check on him.  Under Kim's guidance, Indy returned to work and regained his musculature.  I had worried that Indy might have sustained permanent neurological damage, but his spinal cord recovered completely.

In April 2006, Kim took Indy to his first show since his injury, competing at Intermediate II. He looked fabulous and later that year they won their Regional Championship title at that level.  The following May, Kim showed Indy at Grand Prix. It had been four years since Indy's last show at that level. He truly is the comeback kid.