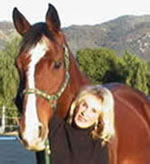 On a fall day, September 19, 2003, my then 16 year old best friend Finnigan, a handsome large Dutch Warmblood gelding, was seriously injured with three broken vertebrae in his neck.

At that time I was not aware of the term “WOBBLES.” As you can imagine when I saw Finnigan I was devastated. We rushed him to San Luis Rey Equine Hospital, and Dr. Barrie Grant had the “talk” with me, as to what may or may not happen. Finnigan had suffered Myelopathy- Cervical vertebral myelopathy-compression sites C4/C5/, C6 and mild C6/C7, and surgery was the only option to recovery.

On that day I spent hours with Finnigan where he stood patiently seeming to understand that I had to make an important decision. Knowing my strong friend as I did, I knew that we could make it through the surgery, so feigning bravery, I asked Dr. Grant to proceed.

Prior to beginning surgery, Dr. Grant warned me that it would be vital that Finnigan could stand up immediately after surgery, which thankfully he did. Then, wouldn’t you know, he started eating hay.

He spent the next two weeks at the hospital. Then he was in a stall for 60 days at a layup facility, but he always seemed comfortable and never showed any signs of mental stress. I spent every day with Finnigan letting him know that I was there for him. I would massage him and talk to him, sometimes sitting in the stall with him.

The first time out of the stall he had to learn where his back legs were. At first, I walked him by hand for about 10 steps. He always had a great attitude, and he was very patient. What a trooper! We increased the distance over the next 30 days. Finnigan, learned to walk up and down a small incline, and re-learned his balance. That took a couple of more months. Never in a hurry, Finnigan always would let me know if he was uncomfortable. We both knew that over the next year it would be small steps in his recovery.

Later we would walk down to the arena and learn to walk over poles; one pole at a time. When he had accomplished that, we added an additional pole. By the end of six months he was effortlessly crossing poles arranged in a half circle.

We modified our property to accommodate Finnigan’s convalescence and make it more comfortable for him. We continued with walking therapy and as the days went on, he became ever more confident. One day we decided to try his saddle on him. I couldn’t hold back the tears and I knew that he knew that we were close to a new beginning.

We always took our rehab at a slow pace. I began riding dressage with him and he was amazing. He accomplished at least first to second level. This was over a three year period.

Now, Finnigan is 21 years old and retired. He is a happy and content boy.
As unfortunate as it was that Finnigan had to endure the surgery and rehab, it turned out to be one of the most rewarding times of our long friendship.

Thanks to Dr. Grant and his amazing staff for helping to save Finnigan and providing me and my very good friend Finnigan with many additional years of joy.